skip to main | skip to sidebar

WHAT IS A DESTROYER ESCORT? - PAGE 20 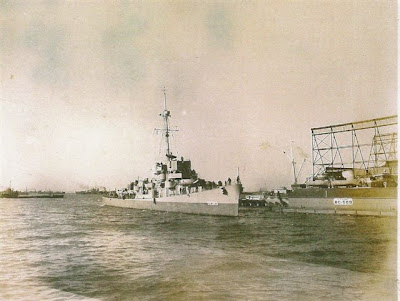 The USS Pride (DE-323) was an Edsall-class destroyer escort built for the U.S. Navy during World War II. Between World War I and World War II the United States made little to no effort to design or produce escorts. So in 1941, sensing a serious need, the U.S. Navy Bureau of Ships produced its own escort design known as the Destroyer Escort (DE). They played a significant role in the successful movement of materials to the war fronts in the Atlantic, Pacific, and the Mediterranean theaters.

Although orders had been placed for 1,005 DEs. only 563 were actually constructed. The United States Coast Guard provided offercers and crew to man 30 of these DEs. Each ship consisted of about twelve officers and 165 men.

These vessles were "rough riding" and did not possess the seaworthy qualitites of most cutter designs. William Valencheck remembers many men aboard with serious cases of sea sickness. Men would tie themselves into their bunks so that they would not end up on the deck during a rough voyage. Eating sometimes provided its challenges and anicdotes about using the head or taking a shower were shared and for the these we will allow the reader to use his imagination. But the ships did have speed, maneuverability. and range to carry out their ocean escort mission.

The USS PRIDE served in the Atlantic Ocean the Pacific Ocean and provided destroyer escort protection against submarine and air attack for Navy vessels and convoys. She returned home proudly at war’s end with three battle stars and then entered into service for the U.S. Coast Guard before final decommissioning.

The above information was taken from Wickapedia and from an article written for the US Coast Guard acadamy Alumni Bulletin March 1987 by C. R. Peck, class of 1943
Posted by Fr. V at 3:34 PM

I'm trying to reach the author's of this blog. My Grandfather served on the Pride and likely knew Mr. Valencheck.

The Greatest Generation is disappearing. According to Veterans Administration at the beginning of this year there were approximately 5,032,591 veteran of World War II still living in the United States but they are dying at the rate of 1,136 a day. As they die so do many of their memories.Sometimes the memories die before the veteran does himself. Our Father, MoMM3c William Valencheck who served aboard the USS Pride DE 323 and who is now confronting the ravages of Alzheimer’s at the age of 87, has lost much of his memory. Though he never would talk much about his experience of WWII, he cannot now even if he were so inclined.In putting his estate together there was revealed a sizable cache of his memorabilia from WWII. There were letters from old girl friends, pictures of fellow guardsmen, drawings, and other mementos that for us are disconnected from actual people and events. Unsure what to do with all of these images of memories that are in some way treasures, his children thought to begin this blog and post the various items from week to week.The intention is not so much to focus on MoMM (Motor Machinist Mate) William J. Valencheck or even to give an in depth historical analysis of the war, but to give a snap shot of some of what a crew member aboard a U.S. Coast Guard ship during the great war held on to as memories.